Writing What I Know — and Love — Kelly Irvin

Today I’m thrilled to welcome Kelly Irvin as she shares insights about her new release.

At one point, I’d given up on ever seeing Over the Line published. I started writing it several years ago, but my writing journey took me in a different direction. I love writing Amish romances, but I longed to dig into the muck and mud of a romantic suspense story once again. And revisit a time in my life when I was young, single, a newspaper reporter, living in the raw, gritty border town of Laredo.

Over the Line had its beginnings in the many articles I wrote about life on the border. It also touches on the time I spent with other journalists who were young and often away from their homes and families for the first time. We became like family as we celebrated birthdays, holidays, awards, and fond farewells together over the span of five years I spent there. We competed for stories during the day, but at night we closed ranks and provided the support that we needed to thrive so far from anything familiar.

Much time was spent in a pool hall called the Sky Lounge where we argued, indulged, and clashed over the green felt of much used pool tables. We even mourned the death of a newspaper there one awful night when the Laredo News folded. Not just because we’d lost our jobs, but because newspapers—at least in those days—served as a critical government watchdog of the citizens of this country. Much as changed since then, but journalists still play an important part in keeping democracy alive.

All these complicated relationships and all the beauty of the border’s melting pot cultural heritage are fodder for Over the Line. I can’t imagine trying to set a story in Laredo with all its difficult challenges today without having lived and breathed it. Laredo is not only the setting of the novel, it’s a character who enriches the story and gives context to the tremendous strength a community must have to withstand the onslaught of drug and gun-dealing gangs’ intent on using these border crossings for their nefarious dealings.

The book’s dedication to the Sky Lounge gang is a heartfelt reminder that I spent five years with a special group of men and women who loved journalism, loved the written word, loved truth, and loved each other like family—sometimes better than family. I might have written Over the Line without them, but I doubt it. The book would certainly have suffered for it. They say you should write what you know, but I rarely agree with that maxim. In this case, it fits perfectly. 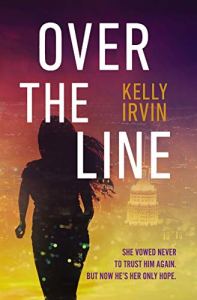 Gabriella has never forgiven her former fiancé, homicide detective Eli Cavazos, for breaking her heart. Then a man she’s never met shows up at her restaurant, a bullet in his chest and her brother’s name on his lips. Gabby soon realizes this man is connected to a powerful ring of criminals who know far too much about her.

Against her better judgment, Gabby turns to Eli for help in finding her brother. When she receives a cryptic text from her brother’s cell phone, she realizes she’s in deep and may be dragging Eli down with her. With her brother nowhere to be found and pain from her past threatening to overwhelm her, Gabby wonders how she will make it through this unexpected quest unscathed—or alive.

Taking us into the heat of Laredo, Texas, the secrets of a gun-smuggling ring, and the tensions on both sides of the border, Over the Line will keep you guessing until the last page. 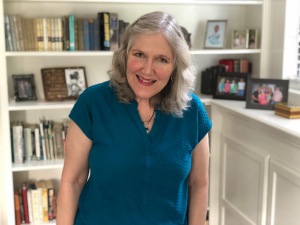 Bestseller Kelly Irvin is the author of fourteen books, including romantic suspense and Amish romance. Publishers Weekly called her first romantic suspense novel, A Deadly Wilderness, “a solid romantic suspense debut.” She followed up with No Child of Mind. The two-time ACFW Carol finalist worked as a newspaper reporter for six years writing stories on the Texas-Mexico border. Those experiences fuel her romantic suspense novels set in Texas. A retired public relations professional, Kelly now writes fiction full-time. She lives with her husband, photographer Tim Irvin, in San Antonio. They are the parents of two children, two grandchildren, and two ornery cats.

One thought on “Writing What I Know — and Love — Kelly Irvin”