Research For A Novel Can Be Very Interesting — James R. Callan

When I was preparing to write A Silver Medallion, I knew part of it would center around San Sebastian del Oeste, Mexico, so I made a visit to the area. From Puerto Vallarta sitting just feet above sea level, my wife and I traveled about fifty miles to the old mining town of San Sebastian which looks down on Puerto Vallarta from an elevation of nearly 5,000 feet.

The last half of the four hour trip was over a road both beautiful and dangerous. At times it was barely passable, ran through running streams and often the landscape dropped from the often-eroded edge of the narrow dirt road down hundreds of feet. Orchids grew wild among many tropical flowers. (A new road has now been built and while very nice, and whacks the time of the drive in half, it’s neither as dramatic or beautiful.)

The town was fascinating and many stories could be told about it. But because of the season, I’ll concentrate on just one.

We were walking under a beautiful tree, perhaps twelve feet tall. It was not like any other tree I was familiar with and we stopped to examine it. I pointed out it had some red leaves that looked much like a poinsettia. But this was a tree.

Over lunch, we asked a Mexican about the tree. I suspect he’d been asked this question before because he had a complete explanation. The tree was a poinsettia. I was amazed as I was familiar only with the small decorative plants most popular at Christmas time.

He explained the species was indigenous to Mexico and could reach a height of eighteen feet. The Aztecs used the plant to produce red dye. It was also used as an antipyretic medication. They called it Cuetlaxochitl. In the 17th century, the Franciscan priests in Mexico began to include the plant in Christmas decorations.

In early 19th century, Joel Roberts Poinsett, an ambassador from the U.S. and a botanist, discovered the plant in southern Mexico. He took cuttings back to South Carolina and began to propagate it. Sometime later, he sought and received a patent on it, and named it Poinsettia. In the 20th century, the Ecke family used grafts to produce plants much more compact and attractive.

The story of the poinsettia was only one of the many things I learned on my scouting trip to San Sebastian, a lovely, old Mexican mining town set high in the mountains, yet probably no more than twenty-five miles from the ocean. I set a number of scenes in and around San Sebastian. My trip there allowed the scenes and descriptions to be more accurate and exciting.

Much has changed in and around San Sebastian in the last few years. But it is still a lovely and interesting old Mexican mining town. Worth a visit.

Send an email to jim@jamesrcallan.com and I’ll send you free the first six chapters of A Silver Medallion.

After a successful career in mathematics and computer science, receiving grants from the National Science Foundation and NASA, and being listed in Who’s Who in Computer Science and Two Thousand Notable Americans, James R. Callan turned to his first love—writing. He has had four non-fiction books published. He now concentrates on his favorite genre, mystery/suspense. His twelfth book releases in May, 2018. 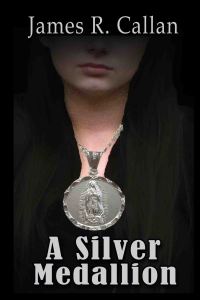 CRYSTAL Moore drove slowly along the sandy road that curved through the property she had roamed as a child. Her grandparents had christened it “The Park” when they purchased it over fifty years ago. To Crystal, they could have named it Serenity. The tall, stately Southern pines, the oak and hickory trees, the mirror-still lake, the peaceful quiet, all worked to cast a spell of tranquility over her.

Crystal’s maroon LeSabre crested the hill. Two hundred feet ahead, her grandmother stood under a maple tree, its autumn foliage creating a golden halo above her grey hair. Eula Moore was staring at the small storage shed about twenty feet behind her cedar-shake house. She aimed a double-barreled shotgun at the door of the building.

Fifty feet from Eula, Crystal switched off the ignition, eased out of the car, and moved forward, careful not to crack a twig or crunch a dried leaf. Now she saw her grandmother’s right index finger curled around the trigger. Whatever was going on, she did not want to distract her Nana.

Eula Moore pointed the shotgun at the shed, her wrinkled hands as steady as those of an eye surgeon. “Don’t make no sudden moves. I got a nervous trigger finger. I might just blow your head off.”