A Home for Fritz – the Story Behind the Story — June Foster

Today I’m excited to welcome author June Foster as she shares the story behind her story, A Home For Fritz.

During the summer of 2017, my husband and I parked our RV at the Shell Campground and worked there for three months in exchange for the price of our site. The park is located in Shell, Wyoming, at the base of the Big Horn Mountains in the north eastern part of the state.

We never suspected the adventure that awaited.

The owners of the park, Kevin and Emily Clark were a delightful couple. Joe, my husband, and I wished we could’ve adopt them as our kids. Even today, we still stay in touch. 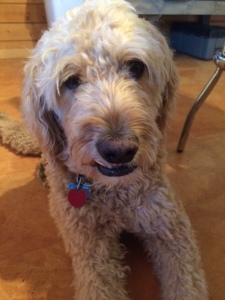 Oddly about that time, my editor, Cynthia Hickey, asked for volunteers to write a novella in which the couple met because of a dog. So, my story, A Home for Fritz, was born.

I had more material than I could use. I took full advantage of what I could learn from locals, the nearby city of Cody, and the majestic Big Horn Mountains. Most exciting, in my story, the heroine visits a dude ranch where the hero is a wrangler. The ranch is inspired by the real life ranch by the name of The Hideout not more than five miles from Shell.

Since we stayed in Wyoming for three months, I had plenty of time to interview the wranglers, the office lady, and the owner of the Hideout. The owner, Mr. Peter DeCabooter, took me on a grand tour of the grounds, the pastures, the barns, and the guest quarters. I couldn’t have asked for any better hands-on research. When I wrote the book, I could visualize every scene.

Best of all, I featured the RV park owners’ dog, Fritz. After the publication of the book, Emily said she actually read the book to Fritz and he loved it. Well… that’s what she said.

I hope you’ll get a chance to read Fritz’s tail, I mean his tale. 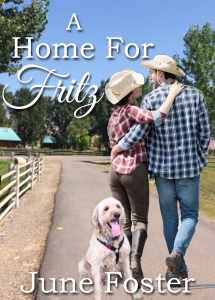 All Brooke Cantrell wants is two weeks to live Brooke Radcliff’s life. But the one person who knows the truth resides in the room next to hers at Sunlight Peaks Guest Ranch. When Brooke falls in love with the handsome wrangler who works on the ranch, will her employer’s daughter tell him the truth Brooke hides?

Garrett Bowman has finally found peace under Wyoming skies at Sunrise Peaks Guest Ranch. Never again will he return to the demanding corporate life in Seattle, Washington. But will the guests recognize him from the incriminating newspaper and magazine articles eighteen months ago?

When Garrett’s dog, Fritz, is in grave danger, an intriguing guest helps Garrett get his golden doodle to the vet. As Fritz heals, he whines and begs until he can lay his head in Brooke Radcliff’s comfortable lap. Fritz has fallen in love, but so has Garrett.

If Garrett discovers Brook’s secret, will he walk away from her?

If Brooke learns Garrett’s true identify, will she turn from him like all the others

June Foster is an award-winning author who began her writing career in an RV roaming around the USA with her husband, Joe. She brags about visiting a location before it becomes the setting in her contemporary romances. June’s characters find themselves in precarious circumstances where only God can offer redemption and ultimately freedom. Find June at junefoster.com.