Character Names: Where Do They Come From? — Michael Ehret ( + GIVEAWAY)

Today I’m excited to welcome Michael Ehret as he discusses character names and answers a few spotlight questions. Read through to the end to find out how to enter the giveaway.

He’s been married for 37 years to Deb and they have three children, one dog (a miniature Schnauzer named Baxter), and a granddog (Wrigley).

As a seat of the pants author, I never know where most things connected to my stories come from. They just sort of appear. But even I have never had a character name herself; that is, until Berly Charles came on the scene in my novella, “Big Love,” contained in the Coming Home: A Tiny House Collection book. 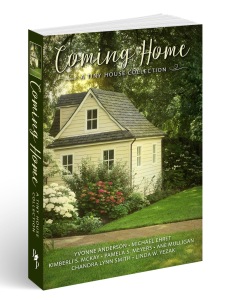 When we knew we wanted to do this novella collection centered on tiny houses, my wife and I had just finished touring the Tiny House Road Show when it stopped here in Indianapolis. On a subsequent weekend trip to Cincinnati, we brainstormed a couple ideas about how it could be approached.

What if the man in the story was a writer for an architectural journal who thought himself too sophisticated to do a story on tiny houses? What if the woman was the president of a company building tiny houses with the idea to use the proceeds to battle homelessness (and who also provides tiny houses, at cost, to those who need a place to live off the streets)? Then, what if both of these people had experienced homelessness in different forms and it had drastically affected their lives, but it different, opposite ways?

But I still couldn’t seem to get the story started in a way that fired my imagination. Then one day I’m driving around the north side of town and I spot a street sign for Timberly Drive and the voice of my female character just pops into my mind and starts talking.

I’m just going to put it out there. My name’s Timberly. Yeah, Timberly. Get over it. I did long ago, okay? What can a girl say? My father, the dealmaker, cut what he called a “win-win” with my mother. Trouble is, there were three people in the deal, but only two of them “won-won.”

Mom sensed, the way moms sometimes do, that I was a girl and wanted to name me Kimberly after her best friend in high school. Dad—Timothy Robert Charles—wanted a boy to carry on the family name and be named after him. No one really asked me, which was probably good because I dislike both the K and the T versions. 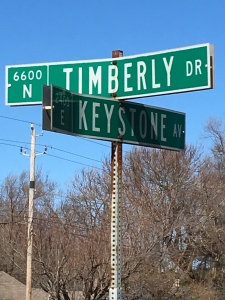 With that kind of attitude, how could I ask her to change her name? From there the story began to unfold.

Homelessness expanded her world and constricted his. Now she needs his help, but he only remembers the pain. Can they find big love in a tiny house?

And once Berly appeared there was no shutting her up. I started writing, burning through the first draft of the novella in a little over a month. My current manuscript isn’t moving that fast, but I’m making what I consider good progress.

The key to getting my creative process started is to let the character speak to me. When he or she is ready, I’m finding they appear. Then all I have to do is capture the story adequately. But that’s a different post.

I was told I could never make a living writing, but I’ve done that my entire life—and so far none of us have starved. My first writing job was as an obituary writer for the now defunct Indianapolis News (then the Indianapolis Star after the two papers merged), but I was able to move on from there covering education, church, government, and some entertainment stuff. After that, I worked for decades in corporate communications/marketing. This taught me there is more than one way for a dream to come true.

I am also a disco dance champion, but we don’t talk about that.

The discovery. I sit down with the barest of ideas and no details and I just start writing. All the time I’m wondering, “Where is this story going to take me?” I’ve written myself into a couple of corners that way, but I’ve also discovered some amazing things.

My favorite thing is when I’m writing and I don’t know what is going to happen next. When it happens I’m surprised. I have made myself cry, laugh, angry, and surprised. But I believe what I write is the truth of the thing, at least as that character sees it.

Talk about the book. Bring it up in conversations with friends who may also like it. Write a book review on Amazon or Goodreads or your own blog—anywhere that others can see it. It’s true that word of mouth is the best tool for book promotion. I’m working on the next book now. I could also use any good thoughts or prayers you want to send my way.

Enter to win an ebook of Coming Home and “Big Love”

Answer this question for a chance to win: My novella “Big Love” incorporates the idea of tiny house living as a way to address homelessness. Would you ever consider living in a tiny house? Why or why not?

Here’s the first page (plus just a bit for cohesiveness) from my novella, “Big Love,” from the Coming Home: A Tiny House Collection book. One of the fun things about this story is I use both first person (for the female lead) and third person (for the male lead and anything that’s not in the female’s POV). I chose this approach because I “heard” Timberly talk so clearly in my head, I knew I had to let her speak for herself. I’ve been told the technique works really well.

I’m just going to put it out there. My name’s Timberly. Yeah, Timberly. Get over it. I did long ago, okay? What can a girl say? My father, the dealmaker, cut what he called a “win-win” with my mother. Trouble is, there were three people in the deal, but only two of them “won-won.”

Mom sensed, the way moms sometimes do, that I was a girl and wanted to name me Kimberly after her best friend in high school. Dad—Timothy Robert Charles—wanted a boy to carry on the family name and be named after him.” No one really asked me, which was probably good because I dislike both the K and the T versions.

And, no, in case you’re wondering, I was never confused about who I am. I decided early on who I was and who I wanted to be. Let me start over.

I’m Berly Charles. I live in Broad Ripple with my four-legged main crush, Baxter, my mini Schnauzer. The Ripple used to be the coolest neighborhood in Indianapolis but isn’t any more now that the people looking to gain cool by osmosis have overtaken it. But I still like it. I’m single, twenty-nine, naturally redheaded, and sassy. And I like it that way—most of the time.

Other times? Well. Hmm. Why don’t I tell you what I do for a living?

During the day I run a tiny construction company that’s part of my dad’s conglomerate, King Charles Enterprises. Yeah, I know, ego much? But I love my dad, and he did give me one thing—other than the strangest name of all my friends. He gave me tenacity. And a mind for business. So that’s two, I guess. Plus the name. Okay, three. And he did love me. We’ll go with four and an option to upgrade.

When I said I run a tiny construction company, you probably thought it was a little boutique-like construction business my dad set up for me to build a house or two a year and feel like I’m doing something meaningful. It’s okay. Lots of people think that. If you did, you’re wrong too.

5 thoughts on “Character Names: Where Do They Come From? — Michael Ehret ( + GIVEAWAY)”